Q. What is Scholarly Communication and why should I care?

I keep hearing the phrase "Scholarly Communication", but I don't know what it means. Or why it is important to me as a member of the Western Community.

Scholarly Communications, or the scholarly conversation, refers to the way in which research and scholarship is created, disseminated, and reused. This process is simplified in the illustration below. 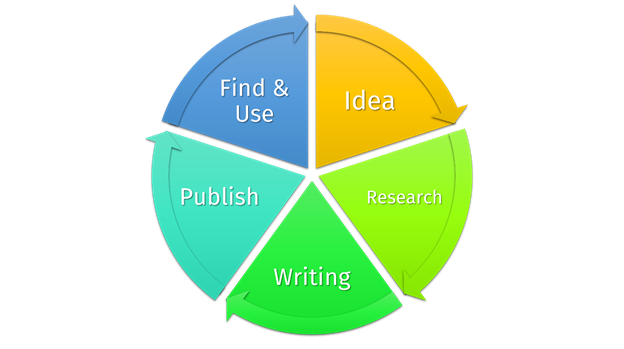 This is a continuous process, where new research and scholarship builds on that which has been previously created. This cycle of interconnected processes encompasses individuals, such as researchers, instructors and students, institutions like Western, and organizations and corporations such as scholarly societies and publishers. In this cycle, researchers and scholars use previously published research as the starting point for new research, writing articles and books detailing their research, which scholarly societies and publishers make available, and university libraries then purchase access to that research so researchers and scholars have access to that information.

This is not a traditional economic process, but one that is disjointed and allows publishers to act as monopolists. The reward system in academia for partaking in the publication process isn’t connected to the publishing process. When researchers and scholars submit their articles to journals for publication, they do so for free. Instead, academics are rewarded for their work through the recognition inherent in the tenure and promotion process. This disconnect breaks down in the university library, as publishers then sell those research materials back to the university and library—typically at a markup far beyond traditional inflation. For example, Elsevier had a profit margin of 36% in 2010, higher than companies like Apple, Google, and Amazon in the same year. (In 2020, RELX—Elsevier’s parent company—reported a margin of 29.2%.)

It is important to note that this has been going on for decades, while library budgets—including Western Libraries’ budget—have remained flat or nearly so. This continual increase in journal pricing, which has been called the Serials Crisis, continually decreases the libraries’ purchasing power. Which ultimately results in the loss of access to materials, and has led to a greater interest and activism around Open Access to research.

Powered by Springshare; All rights reserved.
Login to LibApps